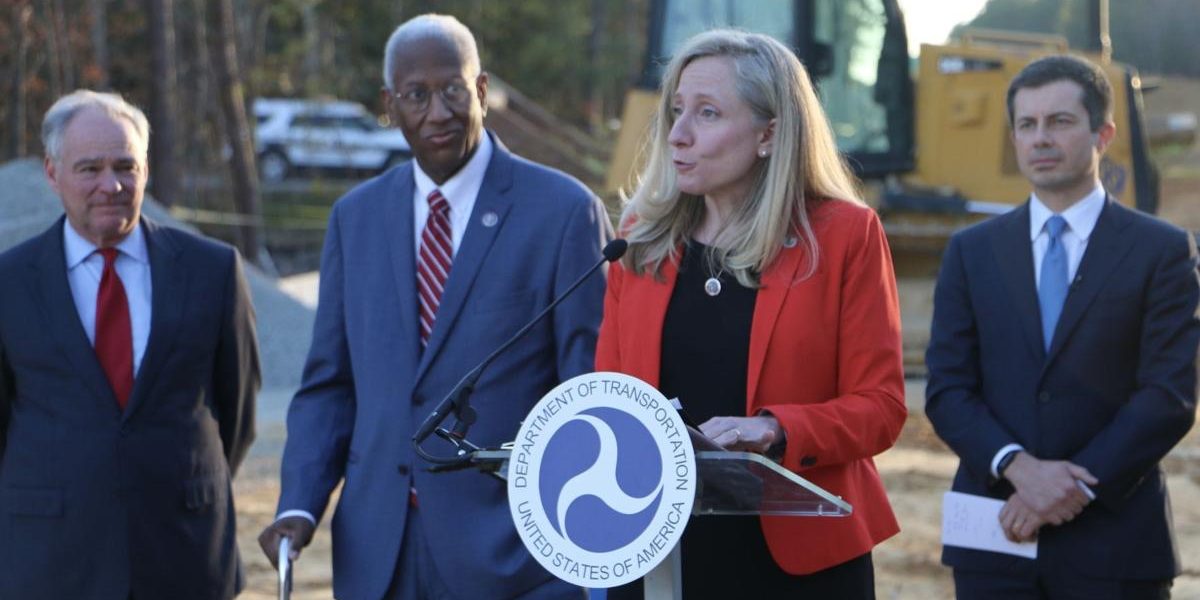 In response to a rash of reckless decisions by pharmaceutical companies, U.S. Representative Abigail Spanberger is leading a bipartisan effort to protect the 340B Drug Pricing Program and prevent additional prescription drug hikes on Virginia healthcare providers and the communities they serve.

The 340B Drug Pricing Program was enacted by Congress in 1992 with bipartisan support and is overseen by the U.S. Department of Health and Human Services (HHS). The program requires that pharmaceutical companies give safety-net and rural healthcare providers discounts on their drugs — in exchange for having their drugs covered by Medicaid. The program has a longstanding record of keeping drug costs low for Virginia patients who are low-income, live in underserved communities, or suffer from serious chronic illnesses. But in recent years, some drug manufacturers have stopped honoring 340B discounts for drugs dispensed through pharmacies that contracted with 340B providers — dramatically increasing the price of those drugs for vulnerable patients and providers.

Following a major, bipartisan push led by Spanberger last year, HHS and the Health Resources and Services Administration (HRSA) sent warning letters to pharmaceutical manufacturers that refused to provide discounted prescription drugs. But even after these warnings, those companies have made no effort to come into compliance with their lawful obligations — and HHS has not followed through with an enforcement action. This situation jeopardizes the integrity of the entire program and threatens affordable drug availability throughout rural America.

In a letter sent to HHS Secretary Xavier Becerra, Spanberger led a six-Member effort in pressing the Biden Administration to take immediate action against these drug manufacturers that refuse to comply with the laws on the books. Additionally, she called on HHS to protect rural providers’ access to the discounted drugs they need to keep Virginia’s communities healthy and safe.

“Despite overwhelming opposition from Congress, the previous Administration, this Administration, and thousands of 340B-covered entities and safety net providers around the country, more and more drug companies have begun to willfully deny 340B pricing to safety net providers who serve the most vulnerable patient populations in our communities,” said Spanberger and her colleagues. “HHS has the authority to take enforcement action that could deter these manufacturers – and any other manufacturer considering such action – from engaging in this unlawful activity.”

Their letter continued, “Healthcare providers who rely on the 340B program and the patients they serve are suffering and cannot wait much longer for HHS to protect the program’s integrity. Many 340B-covered entities are struggling with severe financial losses and staffing challenges as a result of the COVID-19 pandemic, and they cannot afford to pay higher up-front prices for the drugs their patients need. Drug companies’ refusal to offer 340B pricing for drugs dispensed through community pharmacies impedes the ability of covered entities to finance critical health care for their patients. Again, we urge you to move quickly to enforce the law and begin assessing civil monetary penalties on manufacturers that have denied 340B pricing to providers.”

“Given drug manufacturers’ effort to limit 340B discounts to contract pharmacies, we appreciate Rep. Spanberger’s efforts to ensure safety-net providers like UVA Health continue to receive discounted pricing from drug manufacturers,” said Wendy Horton, PharmD, MBA, FACHE, CEO, University of Virginia Medical Center. “The savings we see from reduced drug expenditures as a result of the 340B Drug Pricing Program are essential to supporting our mission to serve those who need us most.”

“The 340B drug discount program has been a lifeline to Central Virginia Health Services and the communities we serve by helping our uninsured and underinsured patients access discounted medications for high blood pressure, diabetes, or HIV/AIDS,” said Paula Tomko, CEO, Central Virginia Health Services. “Unfortunately, in recent years big pharmaceutical companies have unilaterally and unlawfully decided to increase the prices they charge for their medications to providers working in underserved communities. It is disappointing that big pharmaceutical companies – many of whom have reported excellent financial years – are dramatically increasing the prices on drugs needed by safety-net providers and underserved communities in the middle of a global pandemic. We appreciate Rep. Spanberger’s continued support for community health care providers, and applaud her efforts to protect the 340B program.”

“The 340B drug discount program benefits thousands of safety net providers across rural Virginia. The discounted drugs available through the 340B program support patients’ access to substance use disorder treatment, childhood screenings, and other vital care,”  said Beth O’Connor, Executive Director, Virginia Rural Health Association. “Unfortunately, many drug companies have refused to honor 340B pricing, despite their legal obligation to do so, dramatically hiking the price of their drugs for rural providers who continue to struggle under financial pressure from the COVID-19 pandemic. The Virginia Rural Health Association appreciates Rep. Spanberger’s efforts to protect rural communities’ access to discounted drugs and support the integrity of the 340B drug discount program.”

“If we are to have any hope whatsoever of ending the HIV epidemic this decade, we must have a properly financed HIV safety net. It cannot be done without the safety net,” said Jesse Milan, President & CEO, AIDS United. “The 340B program is a vital pillar of that safety net, providing millions of dollars in funding to cash-strapped, frontline HIV service organizations across the country, which enables them to provide care and services to those in need. We at AIDS United support efforts to stop pharmaceutical companies from continually shrinking these organizations’ resources through over-charging for their medications. The lives of people living with and vulnerable to HIV are on the line.”

“We applaud Rep. Spanberger and her colleagues for their unwavering advocacy to enable Community Health Centers (CHCs) to retain 340B savings.  CHCs rely on these savings to support a range of important health services for their 30 million medically-underserved patients, and this letter highlights the urgent need for the Administration to act aggressively to enforce the law and prevent drug manufacturers from denying CHCs the savings provided by the 340B statute,” said Steve Carey, Federal Legislative Strategist, State Associations of Community Health Centers.

“Given the unprecedented health crisis our nation is now experiencing, the 340B Drug Discount Program provides an indispensable financial lifeline for our nation’s safety net hospitals and the communities they serve. Sentry appreciates the ongoing bipartisan efforts in Congress to preserve and protect this vital drug discount program,” said Lisa Scholz, Head of Industry Relations Sentry Data Systems.

“We applaud the continued leadership of Rep. Spanberger on this critically important issue. This bipartisan effort makes it clear that the unlawful efforts of these drug companies fly in the face of Congress’ intent in creating 340B 30 years ago,” said Maureen Testoni, President & CEO, 340B Health. “We appreciate the efforts of the Department of Health and Human Services and the Health Resources & Services Administration to restore 340B pricing for safety-net hospitals and the patients who rely on them for care. The actions of these companies are weakening the safety net and threatening the health of patients and the sooner they are reversed, the better.”

“The AHA thanks Representative Spanberger and this bipartisan group of representatives for their continued efforts to protect the 340B program, and the vulnerable communities it benefits, from efforts to harm the program,” said Stacey Hughes, Executive Vice President, American Hospital Association. “We echo this call for the Department of Health and Human Services’ Health Resources and Services Administration to take swift and decisive action to halt these pernicious tactics from pharmaceutical manufacturers and ensure that 340B drugs remain available and accessible to vulnerable patients and communities across the country.”

“The unconscionable and illegal actions by drug manufacturers to restrict 340B discounts puts the health of millions of Americans at risk—especially underrepresented people who have suffered the most during the pandemic,” said Bruce Siegel, MD, MPH, President & CEO, America’s Essential Hospitals. “We thank Reps. Spanberger, McKinley, Axne, Johnson, Matsui, and Katko for their leadership to hold these manufacturers accountable and protect health care access for low-income patients.”

“We are incredibly grateful to these six Members of Congress for leading the fight to protect the 340B safety net. We need them now more than ever as we continue to fight on the front lines against the pandemic,” said Shannon Stephenson, CEO, Cempa Community Care in Tennessee; President, Ryan White Clinics for 340B Access (RWC-340B).

Attached to her letter and to reiterate the strong, bipartisan coalition behind this push, Spanberger included a February 2021 letter to HHS that was signed by 225 of her colleagues — calling on HHS to require manufacturers to refund providers for months of unlawful overcharges. Spanberger’s earlier letter also called on HHS to preserve covered entities’ access to upfront rebates, which would be consistent with longstanding program guidance.